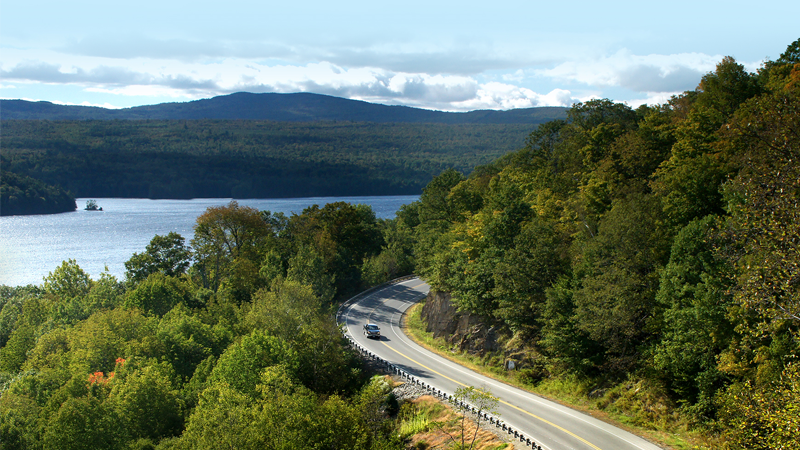 The small towns of Bingham and Moscow sit at the junction of U.S. Route 201—Old Canada Road—and Route 16, which heads east across Somerset County. Together these two towns makeup one population center and are home to just over 1,500 people.

Readily known as the gateway to Maine’s outdoor sporting paradise, Bingham sits precisely halfway between the North Pole and the Equator on the 45th parallel. Local anglers are especially fond of the Kennebec River here, affectionately calling sections of the river Rainbow Alley. Houston Brook Falls, a lesser-known waterfall than Moxie Falls further north, roars where Houston Brook empties into Wyman Lake on the Kennebec River.

Originally a part of the Bingham Purchase, Moscow is situated just north of Bingham and 24 miles from Skowhegan. The friendly town’s outstanding feature is the Wyman Hydroelectric Dam, which slows the Kennebec River and creates a widening in the river known as Wyman Lake. Visitors driving along the lake should keep an eye open for the dozens of delightfully colored birdhouses, fastened to the retaining wall extending for several hundred yards.

Both towns offer a chance to get away from the hustle and bustle of larger cities and enjoy a wide variety of outdoor recreation in all four seasons; from snowmobiling in the winter to ATV riding and whitewater rafting in the summer, or the quiet pursuit of fly fishing in spring or fall.

Apple Picking
Pick-your-own apples are the top draw in the fall at orchards in Maine's Kennebec Valley, but many orchards offer a lot more than that....

Plan Your Trip
Here are some helpful resources to help you plan your trip to Maine's Kennebec Valley. Weather & Climate Travel Resources Links &...

Farm, Orchard or Ranch
Picking your own produce is an adventure all on its own. Though the weather that brings strawberries, corn, apples and pumpkins in Maine's...
63
Loading...
[6 of 63]
Show More ▼
You Might Like

Pine Grove Lodge & Guide Services
Experience the wilderness and beauty of Maine's mountains and lakes with a tour by truck or boat! On Land: Bob Howe, Master Maine Guide of...

The course winds through woodlands north of Saddleback Mountain and includes single track and nordic...