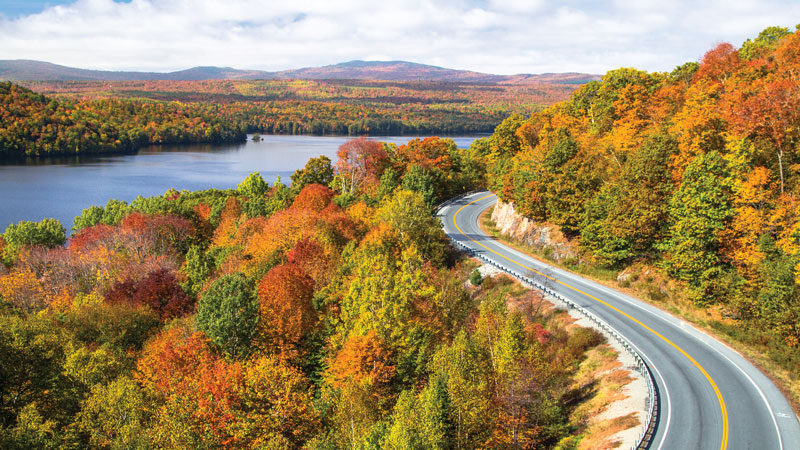 Starting 15 miles above Skowhegan in Solon and traveling 78 miles north to the Canadian border, the drive follows Route 201. The byway begins its journey along the eastern side of the Kennebec River heading north to The Forks, known for whitewater rafting, slowly climbs to Jackman, in the remote Moose River Valley.

Scenic rest areas, overlooks and small parks along the byway feature informational signage in English and French tell the tale of the road's logging heyday, its role as a significant Canadian immigration and trade route, and of Benedict Arnold's ill-fated Bateaux expedition up the Kennebec during the Revolutionary War on his way to Quebec City.

Breathtakingly scenic in every season, fall is the best time to take in the foliage which usually peaks along the byway in late September and early October. If you plan to travel into or through Canada, be sure to bring along your passport or passport card.

Kennebec Valley Trail
This magnificent trail cuts straight up through the Kennebec Valley, curving back and forth with the mighty river while overlooking woods...

Georgia Fuller Wiesendanger Wildlife Protection Area
The donor of this land trust site loved animals and donated the parcels that comprise this property with a stipulation that there be no...

Kennebec River Pub & Brewery
Northern Outdoors is the only white water rafting and adventure resort with its own brewery! After your day of fun and adventure, relax and...

Maine Woodland Owners
MWO was established in 1975 as a non-profit organization. Our mission is to promote sound forest management and strengthen long-term...

New England Forestry Foundation
A forest is a place to watch birds, see wildlife, touch a tree, listen to the wind, or restore your soul. You are never far from one of New...

Join us for the 2022 Moose Permit Lottery Drawing and a day of fun-filled activities celebrating our...